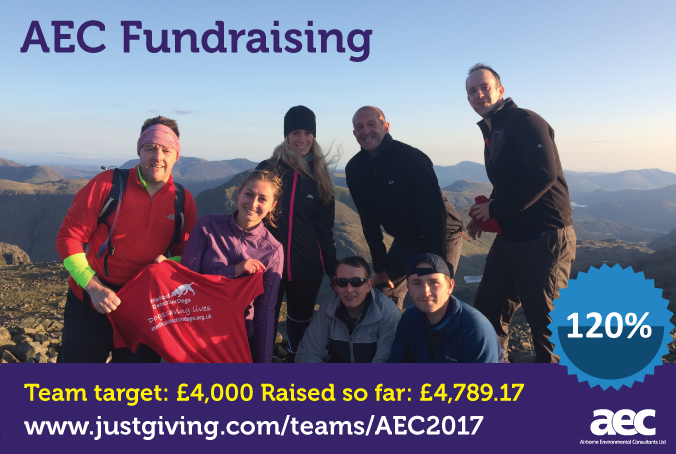 We set ourselves two huge charity challenges and beat our target

For 2017 we set ourselves two huge challenges to raise money for our chosen charities.

During the week of 15th August, Mandy and her relay team were anxiously waiting to hear what day the swim will take place – the race is determined by the weather so the team have only 8 hours’ notice to get to their destination and start the race!

Saturday 19th August they got the call!

Sunday 20th at 7am the team set out on a vessel called ‘Anastasia. The weather was clear and the water was relatively calm. Johnathon took the plunge and started off the first leg of the race.

Next to go in was Faye, then Julie, then Barbara and Karen.

By the time Johnathon had got out the water and waves were turning white and the sea was getting rather choppy - this can slow swimmers down and make you substantially more ill on the boat whilst waiting to get in the water.

The choppy water started to affect two thirds of the team and everyone started to get ill. Mandy who had been on the boat the longest was also feeling very poorly.

Just as Mandy was about to take her turn in the water, the captain of the boat stopped Karen in the middle of her leg and decided to take the team home. The weather took a turn for the worst and the swim had to be stopped.

Feeling very sea sick and disappointed, the team arrived back to Dover at 4pm having only completed 7 miles.

Some of the swimmers intend to take on the challenge again at some point in the future, and as a second attempt for some of the team, they were happy to be on dry land with a brew!

On Friday 1st September our team of walkers set off in the AEC minibus to begin the three peaks challenge, starting with the highest mountain in the UK - Ben Nevis.

Mandy’s husband Adam, drove the minibus with Nick, our building manager following in the support van. Everyone arrived in Scotland, after playing lots of games on the minibus, around 4.30pm and weather conditions were looking good as the team set off for their first climb.

After a tiring 5 hours, the group arrived back at the bus safe and well, had some food and prepared for the journey to Scafell Pike.

On the route down, the walkers attempted to get some sleep (a lot of snoring apparently) before the bleak 4am start up the second mountain.  The team battled through the early hours climb and used the opportunity to take some stunning sunrise photos along the way.

A swift food break back at the bus meant the team we’re back on the road and heading to Snowdon only to be held up in unwanted traffic. It wasn’t long before everyone was putting their boots on again preparing for the third and final mountain.

As the sun came down and it started to turn dark, the group took their final descendent down Snowdon, exited to get back to the bus and sit down for a well-earned rest.

Exhausted and achy, the team headed back to Manchester thoroughly pleased to have completed such an epic challenge!

We’d like to thank everyone who has donated and supported our staff during these gruelling challenges. We are so proud of their efforts and pleased to have beaten our fundraising target for 2017.