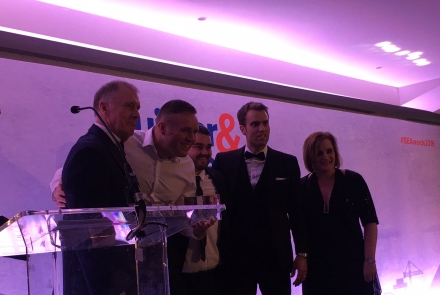 AEC supported the annual Builder and Engineer awards evening at the Anfield Stadium, Liverpool.  Held to bring together the best in the construction industry and recognise the hard work and creativity of business in the sector.

It was also our pleasure to sponsor ‘Housing Project of the Year’ and Debbie Clare, Commercial Director of AEC presented the winners - Home Group Ltd, T Manners and Sons Ltd, Harrow Consulting, John Flowers, Tasker and Child with the award.  The project – regeneration of Sir James Knott’s Memorial Flats, Tynemouth, secured a sustainable future for the historic building and was completed whilst the residents remained in occupation.

AEC also spent the evening with another nominee – Together Housing Trust, Mulbury Homes and Identity Consult for the Knotts Lane, Colne project.  This project revitalised a previously derelict and part finished housing scheme and regenerated a neighbourhood.  It was a pleasure to hear the work that had been undertaken.

As the housing sector is a key part of AEC’s business and involvement is always at the front end of the project with the supply of asbestos surveys and the commissioning of removal, it was a privilege to hear the real stories of the final results for the projects.